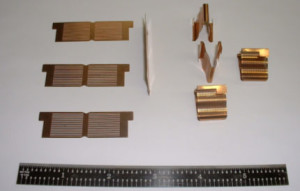 Recently, we worked closely with a client on prototyping an electrical contact to have just the right insertion/extraction forces. Atlantic Precision Spring helped the client determine the best design concept for the prototype electrical contact.

The main challenge presented by this prototyping project was to produce a beryllium copper spring that would fit into a rectangular pocket. Not only that, but the pocket would be inserted with just enough force (one to two pounds) to be able to be done by hand with ease. The second challenge was to have the spring perform to the customer’s required extraction force (four to five pounds) when a copper insert was pulled out of the center of the spring. The spring must contact a rectangular copper insert on both sides with equal force on both pinch points. 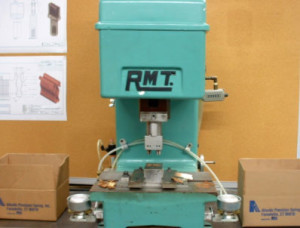 Because of the materials engineering, design, and manufacturing steps, this project could take upwards of a few weeks. However, Atlantic Precision Spring completed the entire project in just a few days. The reason why we were able to get that lead time down so low is that we can manufacture, heat treat, and force test beryllium copper contacts in house, using our collective engineering knowledge to complete projects in a streamlined and effective way.

To start making these beryllium copper contacts, we first made blanks using a process called chemical etching. The advantages of chemical etching can be summed up in three words: quickness, cost, and precision. By using a photochemical etching process, prototypes can be made in a few days, and they cost thousands of dollars less than prototypes made with production tooling. The process also lends itself to a high level of precision, allowing us to make prototypes with unusually tight tolerances. 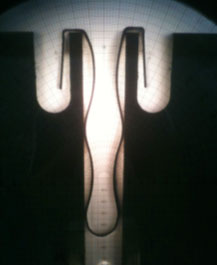 The chemical etching process is done by adding a photosensitive polymer to the beryllium copper, which is then exposed to ultraviolet light. The UV selectively hardens certain areas of the sheet into an acid-resistant surface. Then acid is added to the top surface dissolving any bare beryllium copper not covered by the acid-resistant material.

Overall, this process took only four days from the design of the flat blank layout, to have a sheet of 250 flat blanks ready for forming.

Once we had our first prototypes, it was on to testing. Again, because Atlantic Precision Spring does everything in house, we were able to analyze, test, and make the required changes to the prototype contacts. This allowed us to cut lead times from several days to just hours.

Form tools were precisely manufactured utilizing a wire electric discharge machine (EDM). The EDM worked from a solid model designed in Solidworks. The assembled tools were put into a 5-ton air press, which has the ability to form the part with repetitive reliability. Overall, four different tools were used to complete the final part. 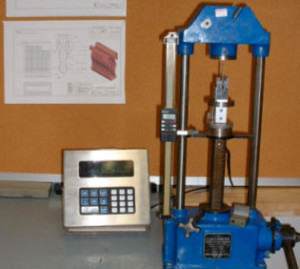 Throughout the prototyping process, we used computer conferencing to stay in constant communication with the customer’s engineering staff. In this way, we received verification of the actual test results. Our close contact with the client improved the contact points, which were developed from the solid models shared between the engineers. We also added photos captured from optical comparators added to the design update process.

Through the prototyping process, a total of three design changes were made to the part. These changes were made to produce the forces required to meet customer requirements. The first design would not allow the contact to be installed into the pocket with the required insertion force. The second change addressed the extraction force that was lower than required to properly function with the copper insert. The final change reduced the distance between the two inserts as an improvement to fit and function.

The whole prototyping process went through several phases of choosing the right material, designing the prototype, chemical etching the blanks, manufacturing form tools, stamping contacts, and making design revisions through computer conferencing with the client’s engineers. Throughout the process, Atlantic Precision Spring was able to fully serve the client’s needs. And, the whole project only took a few days.