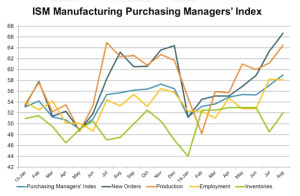 Chad Moutray, chief economist of the National Association of Manufacturers, provides a very succinct summary of the September 2014 Manufacturing ISM Report in “ISM: Manufacturing Activity Expanded Very Strongly in August.” In short, the report depicts the economic activity in the manufacturing sector during the month of September 2014. According to the report, activity expanded for the 16th consecutive month.

Moutray outlines the general growth seen in the data points displayed in the report, including demand, output, and hiring rates. The comments echo the figures shown, as well. The report is reassuring the leaders in the manufacturing industry, providing a very positive outlook for rest of the year. However, what Moutray seems to ignore is the consistently low inventory numbers and its equally consistent slow rate of change.

While inventories are predicted to steadily increase, a percentage point change of 0.5% between August and September is not significant in the least. As shown in the graph above, there was a notable dip in the beginning of the year, between the months of December 2013 and January 2014 (44%). After a peak and a plateau, there was then another significant dip in July (48.5%). Overall, inventory figures have stayed well below the other prominent figures.

Even while inventories continue to increase, there are still hidden and visible costs associated with inventory shortages. The most obvious cost resulting from inventory shortages is lost sale opportunities, often resulting in dissatisfied customers. As the manufacturing is largely B2B-based, entire client accounts and profits may be lost.

Aside from the visible costs, there are additional hidden costs often associated with inventory. These may include longer lead times, reduced responsiveness, and quality control issues. However, these costs are also dependent on other processes, such as employment rates and supplier delivery times, inventory management still plays a large role.

Overall, the report has indicated strong growth in just about every data point covered other than inventories. It’s important for company leaders to continue making strides in finding the appropriate for their business so as to avoid the associated costs. Inventory management is just as important to keep any manufacturing business running smoothly.